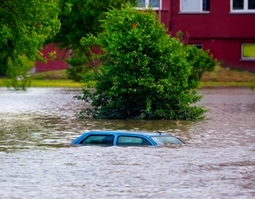 Dozens of Americans lose their lives during floods every year, according to the National Weather Service. In many of these cases, they drown in a place that normally seems waterproof: their vehicle.

In 2013, 82 people in the United States died during flash floods or river flooding. Forty-five percent were in their vehicles – far exceeding the 4 percent who died in floods while they were boating, according to the weather service.

Even though your car protects you from the rain that falls during a storm, just a few inches of flood water below your vehicle can create a serious threat to your safety.

Less than a foot of floodwater can send your vehicle out of control
Flash floods can rise quickly after a heavy storm or a levee or dam break. According to the National Weather Service, the risk is especially high in heavily developed areas such as cities. Parking lots, streets and buildings keep water from soaking into the ground, instead redirecting the water into areas that may flood.

Once a roadway becomes submerged, driving on it becomes risky. As part of its Turn Around Don't Drown campaign, the weather service notes that just six inches of water can cause a passenger car to go out of control or stall. That much water can also sweep you off your feet if you get out of your car.

Estimating the depth of the water covering a roadway can be difficult. In some cases, the current can tear away the road, causing the water to be deeper than you suspect. As a result, weather experts urge motorists to never try to drive through flooding. A foot of water can make your vehicle's tires leave the ground. Two feet of swiftly moving water can sweep away most vehicles, according to the weather service – even those that feel heavy and secure, like pickups and SUVs. Once the current grabs your vehicle, it may carry it to deeper water, where it could sink. If for some reason you have no choice but to proceed through water that's covering a roadway, Progressive recommends these strategies:

Floods can cause a lot of damage to vehicles, and, according to My Fox Detroit, not all insurance policies pay for it. So when you're buying insurance, be sure to discuss which options cover flood damage.

Need to get your vehicle covered? CoverHound is a leading provider of insurance quotes for drivers in the U.S.