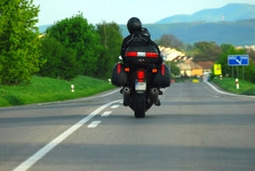 After a recent study by the University of California at Berkeley revealed motorcyclists who split lanes were less likely to experience serious injury compared to those who did not split lanes, the California State Assembly passed a bill to legalize the highway driving technique, The San Jose Mercury News reported. The bill now makes it way to the state Senate before it heads to Gov. Jerry Brown's desk to await his signature before becoming law.

The bill would allow motorcyclists to split between lanes provided they travel no faster than 50 miles per hour and are not driving more than 15 mph faster than the other cars around them on the road. While all other of the 49 states make lane splitting illegal, a growing tide is shifting perception as Texas, Washington, Nevada and Oregon are weighing whether to legalize the practice.

Public disapproval
Despite the soon-to-be legality of the driving tactic, many motorists in California are not a fan of the technique. According to a survey conducted on behalf of the California Office of Traffic Safety, a majority of drivers are not fond of lane-splitting, with 63.5 percent of motorists somewhat and strongly disapproving of the driving technique.

Tom Rice, researcher in charge of the OTC said most motorists are not too happy about allowing motorcyclists getting to drive by a different set of rules.

"When we asked why, they said they didn't think it was fair," Rice said, according to the Mercury News. "They are sitting in traffic while motorcyclists are zipping by."

Not all motorists disprove of the proposal because they think it's unfair. Writing in the Orange County Register, columnist David Whiting, called the legalization of lane splitting lunacy and demanded the proposed bill dial down the bill's speed.

With so much uncertainty in the study, motorists of all shapes and stripes need to ensure they keep their eyes on the road, remain aware of their fellow drivers and try to remain as safe as possible when operating a motor vehicle.