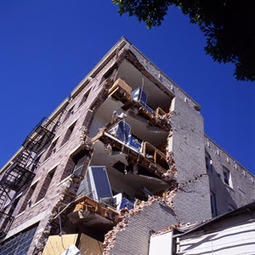 Perhaps you've seen the images of broken wine bottles on a headline news story this past week from Napa Valley, California, where a recent earthquake rattled the region. Late in August, California residents were woken up by the ground shifting beneath them. A 6.1-magnitude earthquake struck the Gold Coast on August 24 in the early morning, causing extensive damage to buildings and injuring dozens. CNN Money said that 176 people reported injuries, while fires erupted. The scene was somewhat chaotic for a state that is used to these kinds of incidents, prompting the need for adequate homeowners insurance coverage.

The California risk
Despite the higher risk of earthquakes in California, most residents don't have enough coverage to protect their home and their belongings from damage from an earthquake. According to the California Earthquake Authority, only one in 10 California residents has earthquake coverage.

Many homeowners may not be aware that a typical homeowners insurance policy does not necessarily include earthquake coverage. A separate policy is required for complete protection. Without coverage, homeowners are left on their own to pay for repairs and replacement costs, which can run in the thousands of dollars from a single earthquake.

The entire state of California has a higher risk of earthquakes, according to the CEA, though there are some areas that are considered lower risk. There are several risk factors that can increase the chances of damage from an earthquake, such as where you live in relation to fault lines, the age and type of your home and the soil type where you live.

There are some parts of the state where earthquakes have remained dormant for a numbers of years, though dormancy increases the likelihood that the next quake will be stronger. The tension among the fault lines can build up over time, and when it is finally released, the strength of the earthquake can cause heavy damage. When there are frequent earthquakes, it is generally understood that the fault lines are releasing that tension.

When you need coverage
Not all areas of the U.S. experience earthquakes, though they can still happen in some cases. Homeowners in California and other states that experience earthquakes often should consider getting a separate policy for this type of coverage in addition to their home insurance coverage. In general, when you are thinking about getting earthquake coverage, you will want to think about how you would replace any items and how much it would cost to rebuild your home if it were destroyed in an earthquake.

How premiums are calculated
Not all earthquake coverage policies are alike. The price you would pay for a policy would depend largely on where you live and what kind of home you live in. For example, there are things that can be done to a home to make it less susceptible to damage from these occurrences. For instance, if you live in California, your rate is likely much higher than someone who lives in a state that rarely, if ever, experiences earthquakes.