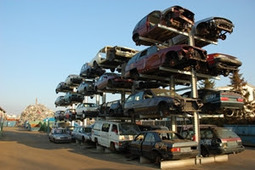 As cars become more complicated and different features become computerized, junkyards have evolved to match the needs of these new automobiles. Gone are the days of being able to walk into a salvage yard and remove a part from an old car that you need for your new one. According to The New York Times, traditional junkyards have been replaced with automotive recyclers, where the proprietors computerize inventory and comply with the necessary environmental regulations.

Many features of modern cars are no longer interchangeable. Some parts need to be reprogrammed while others are specific to a particular vehicle. The increase in technology-reliant qualities has made it almost impossible to simply dismantle a car to obtain its parts.

Automotive recycling doesn't merely operate as some niche aspect in the corner of the overall car industry. According to the Automotive Recycling Association, a trade group with more than 3,000 members, this sector does an estimated $22 billion in revenue and has an annual payroll of around 3.3 billion dollars. These businesses also employ roughly 103,108 people around the country.

Not only do automotive recyclers encompass a large portion of the industry, they provide additional material savings as well. This technique reduces the amount of oil it takes to manufacture new cars by 85 million barrels a year while it provides enough steel to make approximately 13 million new vehicles.

In addition to providing jobs, reducing environmental concerns and salvaging raw materials for new production, automotive recycling also reduces car insurance rates. These businesses purchase inoperative vehicles, such as ones involved in accidents, from insurance companies. This process lets the insurers recoup financial losses, which pushes down overall rates for everyone.