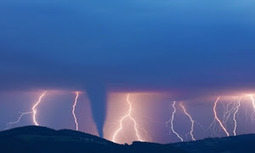 After a month of severe spring weather, April may achieve the first month of 2014 with multi-billion dollar losses in damage.

According to Impact Forecasting, the catastrophe model center at Aon Benfield, April was an extremely destructive month as a result of numerous thunderstorms and flash flooding. In its April 2014 Global Catastrophe Recap, Impact Forecasting reported that 39 people were killed and 250 were injured as a result of multiple events that swept through the Plains, Mississippi Valley, Midwest, Southeast and Mid-Atlantic. During this one event of severe weather, more than 70 tornadoes were reported across the country, many reaching high on the storm intensity scale.

During another weather event, hail the size of softballs was reported in the Denton, Texas, metro area, while more damage was caused throughout the Plains, Mississippi Valley and the Midwest. In total, that one incident is estimated to have caused $500 million in damage, the Insurance Council of Texas found.

Other states that have been heavily affected by weather are Illinois, Missouri and Oklahoma. From April 27 to May 1, damage is reported to have reached $950 million, while losses from injuries have exceeded $650 million.

Tornadoes, heavy rainfall and earthquakes were also reported in China, Chile, Australia, Afghanistan and in parts of western Europe.

When severe weather hits, it's crucial that homeowners know how to react and protect themselves from debris and flooding, and have home insurance to protect them from financial downfall as a result of damage from severe weather.

The White House recently announced that elements of climate change are already being felt through more extreme weather and is expected to continue increasing in intensity. This means that all homeowners need to ensure they have coverage for their homes, including flood insurance which is not typically a part of a general homeowner insurance policy.