A Student Designed And Built A Wind- And Solar-powered Motorcycle 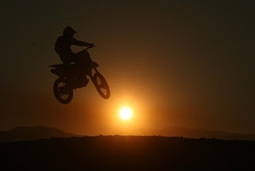 As fuel prices remain at historic lows, many motorists might be thinking that alternative sources of energy for powering vehicles may no longer be necessary. In addition, with all the talk of hybrid vehicles and electric cars, many people can be forgiven for thinking this is the way of the future. However, engineers are continually coming up with new methods for creating sustainable vehicles every day. For instance, an Australian student has designed a solar- and wind-powered motorcycle, according to CNET. Dubbed the Strangelove after the title character in the Stanley Kubrick film, "Dr. Strangelove," the bike might provide a way for motorists to travel without having to worry about fueling stations.

Building a new motorcycle
The motorcycle, designed by Alistair McInnes, an industrial design student at the Royal Melbourne Institute of Technology in Australia, houses a collapsible wind turbine the biker can set up when the cycle is not in use. The bike also makes use of photovoltaic panels that collect solar energy. Combined, the two sources of energy are stored in a battery in the motorcycle's chassis. The rider can erect the telescoping legs during the night to collect energy, or spend a day charging and exploring on foot. By the end of the day, he or she will have a fully charged battery.

McInnes designed the prototype in two months and spent an additional six weeks building it for roughly AU$7,000. Currently, the bike can only travel at a maximum speed of 80 kilometers per hour for roughly 15 minutes using a hybrid engine McInnes found online. Ideally, he hopes to build a engine specifically for the bike that would be capable of traveling up to 500 kilometers on a single charge.

While the design is very much something out of a science fiction movie, the main impetus for the project was a way to deal with a shortage of fossil fuels. The plan is to help those motorists who wish to traverse more rugged terrain where charging stations and gas stations are not as prevalent, such as in a desert environment.

"In the middle of Glencoe I stopped as a thought hit me, in some years' time there will be no way for me, or others, to enjoy a recreational ride like this," said McInnes. "Thus I envisioned a motorcycle design that would allow for people to travel for leisure, when fuel is no longer an option."

Emission standards
While the motorcycle design still needs some work before it's ready for mass production, the proliferation of vehicles that use alternative fuel sources might push major manufacturers to create more sustainable vehicles. As the BBC noted, there are more than 830 million cars on the road, causing governments around the world to impose stricter emission standards on new cars. As auto companies are forced to meet these standards, chances are they'll need to look at technology being designed by people like McInnes to meet these levels.

CoverHound provides quotes for motorcycle insurance from their convenient website.