4 Ways To Protect Your Home From Lightning 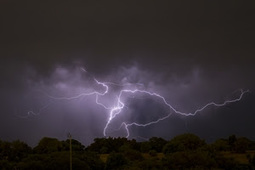 Lightning poses a major risk of property damage to both homeowners and renters by causing fires and power surges that damage electronics. The Insurance Information Institute reported lightning strikes cost $739 million in homeowners insurance losses in 2014, up 9.7 percent from 2013. What's more, the report noted the amount of claims was declining (due to lightning protection technology) and the average cost per claim was rising, as damaged electronics become more expensive.

Whether you're a homeowner or renter, there are steps you can take to prevent your property from being damaged. Here are four ways to protect your home from lightning:

It is especially important to make sure you are covered in case of lightning damage if you live in an area that has frequent lightning storms. According to State Farm, the top 10 states for lightning damage insurance claims in 2014 were: Georgia, Alabama, Texas, Louisiana, Illinois, North Carolina, Tennessee, Indiana, Florida and Missouri.

Use CoverHound's easy-to-use site to find a renters insurance or homeowners insurance plan that works best for you.