3 Tips For Safe Driving Around Trucks 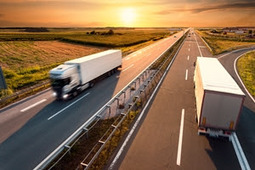 One of the most dangerous aspects of highway driving is trying to pass a semi-truck or just getting stuck behind one. The size of the trailer often obscures your ability to see ahead and it blocks your view of other traffic as well as any potential hazards on the road.

Fortunately, Samsung is trying to solve this problem with the introduction of their "Safety Truck." The technology company attached wireless cameras to the front of a truck. These cameras capture the trucker's view and project the real-time video stream onto the back of the trailer, thereby providing an image of the front of the truck for the benefit of motorists traveling behind him or her. By giving rear-following drivers the advantage of seeing the same thing the trucker sees, the driver will have a significantly better view of when it is safe to pass or overtake the truck. The video will also increase safety by reducing sudden braking or animals crossing the road. The technology works during the day and at night.

Unfortunately, Samsung took the prototype truck out of operation. However, representatives claim the technology still works, and the company plans on working toward creating a new version that complies with existing national protocols while obtaining the necessary licenses, permits and governmental approvals for the vehicle.

Until this new Safety Truck hits the highways, here are three safety tips when driving around trucks:

1. Watch out for No-Zones
Tractor-trailers have several blind spots called No Zones. These are in the front, back and sides of the truck, and if your car gets stuck there, the trucker will be unable to see your car. Avoid these areas as much as possible. If you can't see the truck driver in the truck's mirror, the driver cannot see you.

2. Don't swerve
If you suddenly swerve in front of a truck - either to make a turn or avoid another driver - you can put yourself at serious risk of an accident. Depending on the speed they are traveling, some trucks need the entire length of a football field - 100 yards - to come to a complete stop.

3. Give them leeway
According to Drive-Safely.net, trucks make much wider turns than smaller vehicles, this is especially true about making right turns in urban areas. Be sure to give them a wide enough berth so they can successfully make a turn. Trying to squeeze into the space when a driver turns right is dangerous and could result in an accident.

Ensure your vehicle has adequate coverage, and check out CoverHound's auto insurance quotes from its easy-to-use website.