Words of Wisdom from the USA's First Entrepreneurs 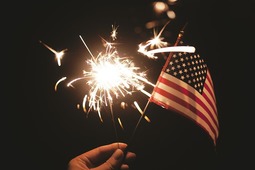 This Independence Day, as you salute the flag waving on high, and smell the BBQ briskets wafting through the air, take a moment and realize that you’re really not much different from our Founding Fathers.

No, really; think about it:

Our Founding Fathers were not going to be bullied around by the big guy, nope. They would strike out on their own and build a nation. Is it really that different from what you’re doing as a small business owner?

In a way, the Founding Fathers were the United States’ first entrepreneurs. So, without further ado, let’s take a look at four pieces of advice from the men who shaped our nation.

Don’t Make Excuses Our first President put it best when he said, “It is better to offer no excuse than a bad one.” If you’re having trouble staying focused or meeting your quarterly goals, don’t make excuses. Instead, figure out how to move forward. The people you work with will judge your business by your actions. If you’re all talk and no action, your excuses will fall on deaf ears.

Think Before You Spend There’s no doubt you’ve heard that you have to ‘spend money to make money.’ That’s not necessarily true. Just ask the 80 percent of companies that close their doors after their first year in business. “Never spend money before you have earned it,” Thomas Jefferson once said. To run a business successfully, you need to set up a budget, plan a strategy, and stick to it!

Expertise Influences Action To create an independent nation, our Founding Fathers had to inspire their fellow countrymen. If they hadn’t had the support, we might all be speaking with a British accent and toasting to the Queen! “The greatest ability in business is to get along with others and to influence their actions,” spoke John Hancock. Business is about understanding your audience, assessing their needs, and building a product or service that satisfies that need. The Founding Fathers knew how to get that done and so do you.

Be Prepared Benjamin Franklin said “By failing to prepare, you are preparing to fail.” When you’re just starting out, the smallest setbacks can be devastating, so small business owners need to be prepared for the unexpected. Fun Fact: Did you know he basically invented modern business insurance? Talk about being prepared. If you’re in need of insurance for your business (you know, to be well prepared) we can help.