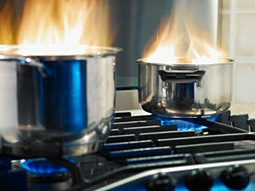 Even if they don't require it, most landlords will advise new tenants to purchase renters insurance. This is because landlords benefit when their tenants have a policy almost as much as the tenants do.

"Landlords benefit when their tenants have a renters insurance policy."

In case of fire
If an accident happens, like a fire or water damage, a landlord can file a claim against the tenant's policy.

"Landlords are getting wise," Gary Wickert, a partner with Matthiesen, Wickert & Lehrer, a Wisconsin-based law firm, told The Street. "They're drafting smarter and smarter leases that allow them to go after the tenants. Renters insurance will hire a lawyer to defend tenants, but it also provides a target for landlords. Now the landlord has a tenant with insurance, instead of a tenant without insurance."

According to The Street, this practice became common about 15 years ago when the cost of property insurance for apartment buildings began to go up. By requiring tenants to have renters insurance, the landlord won't have to pay as much for damages to the building.

Keeping your clothes safe
Renters insurance most commonly covers personal belongings, like clothes, laptops or even a bike outside chained to a bike rack, according to the Chicago Tribune. Some people might not believe they don't have enough expensive items for renters insurance to matter. However, the cost of replacing clothes alone will add up.

Many times landlords will encourage renters to obtain insurance for this reason. They know replacing their things, like their clothes, appliances or electronics, will get pricey. They also know that their renters might worry about monthly expenses. In the eyes of a landlord, theft means tenants have fewer means to pay their rent on time. Insurance not only helps keep people out of debt, but it also makes the ability to pay rent after a break-in or fire more likely.

"This isn't because of warm, fuzzy feelings," Janet Portman, executive editor of Berkeley, California-based legal publisher Nolo, told The Street. "They simply want to make sure the rent stream isn't compromised from the tenant having to plunk down a lot of money to replace lost, stolen or damaged items."

Slip, trip and fall
Renters insurance may also cover injuries sustained in the apartment, according to the Chicago Tribune.

"This is an important piece of the coverage that people often overlook," Jovana Evans, director of property product research at Liberty Mutual Insurance, told the Chicago Tribune.

If a guest falls or gets injured in an apartment and it's the tenant's fault, renters insurance will pay for the medical bills that result from the injury, according to ApartmentRatings.com. If the tenant doesn't have a policy, they will have to pay for the bills out of pocket. Just as in the event of property loss, a landlord will worry that an incident like this could detract from the renters ability to pay rent.

On the other hand, if the injury was sustained as a result of an issue the landlord should have fixed, the landlord will be responsible for the medical bills. For this reason, it is important to inform landlords of any structural deficiencies or maintenance issues that need to be addressed.

Renters insurance isn't something renters should avoid. Generally, it isn't very expensive - on average, $12 a month, according to the Chicago Tribune. Insurance helps to save money if something goes wrong, plus it helps to put the minds of tenants and landlords everywhere at ease.