Should You File A Home Insurance Claim? 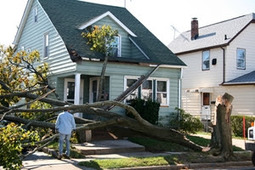 Filing a claim may increase your premiums so it's crucial to consider the consequences before asking your insurer for money.

A recent report from Insurancequotes.com, a Bankrate company, found filing even just one claim can cause your homeowners insurance premiums to rise because there's a statistical likelihood that a person who makes one claim will probably make another in the future. Insurers consider this an increased risk on their part.

How much of an increase?
The type of claim you file, whether it's approved or denied, where you live and other factors all go into whether your rates rise and by how much, Insurancequotes.com stated. On average, people who file one homeowners insurance claim can expect their yearly premium to go up 9 percent. Last year, Insurancequotes.com found the average was 8 percent.

In some states, consumers can expect a lot more than a 9 percent hike though. In 37 states and Washington, D.C., one claim caused annual premiums to rise an average of 10 percent or more. Homeowners filing a single claim in Wyoming can have their premiums raised up to 32 percent.

Other states like Texas are the opposite, one claim is unlikely to change premiums at all.

Should you file a claim?
Knowing what you know now, you should take a minute to think about your current costs and how a claim may raise your rates. According to Mainstreet, a good rule of thumb for deciding to filing a claim is to consider your deductible. For minor damages under $5,000 or less than your deductible, homeowners should seriously consider paying for the issue out of pocket instead of asking their insurer for money.

Filing a claim may be the best option when a home has been hit by a catastrophe or needs major repairs.

Consider the issue thoroughly
Consumers need to be careful when determining the type of damage to their home and anticipated costs. They should contemplate potential hidden repairs and have the issue looked at by professionals to receive an accurate price quote.

Homeowners should make the decision to file or not file a claim before work on the home starts. If a claim is made when repairs are in progress, the insurer could deny the claim and then homeowners are left to foot the bill themselves, Kelly Pappas, an attorney for Foster Sullivan Insurance Group warned, according to Mainstreet.