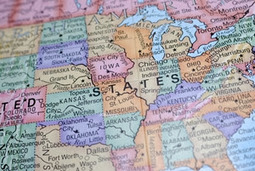 Many different factors go into determining how much you pay for your insurance policies. Actuaries cull data from all sorts of repositories to analyze how much of a risk you might be or how likely it is that you'll need insurance based on your history. Among factors such as age, gender and credit score, where you live also plays a significant role in how much you end up paying as a percentage of income.

One reason location is such a major contributor to determining your insurance rates is because your neighbors' driving record and their lifestyle choices - such as exercise, diets and overall health care choices - all factor into overall rates for a particular location. If people in your area drive on congested roadways, they tend to receive more traffic tickets and get into more accidents, which drives up auto insurance rates. According to the Insurance Institute of America, other aspects of your location such as the cost and frequency of litigation, the prevalence of auto insurance fraud and rates of vandalism and thefts in an area will also detrimentally impact your rates. Similarly, geographic aspects can impact your rates as well. If you buy a house in a region that is prone to flooding or hurricanes, your homeowners insurance rates will reflect that.

When comparing locations on a state-by-state basis, Nerd wallet surveyed how much people pay for total insurance costs as a percentage of their income. While the list might not give you immediate incentive to move to a state with cheaper insurance rates, it can at least shine a light on how much you might be paying relative to residents of other states. According to their findings, policyholders in the Northeast pay more, as four of the five most expensive states come from this region. Costs vary greatly from state to state, as residents in Louisiana pay roughly 18.1 percent of their income compared to people paying only 7.7 percent in Maryland.

Here are the top 10 states with the cheapest overall rates as a portion of their income:

10. Pennsylvania
Residents of the Keystone State pay 10.9 percent of their annual income, or around $4,853, collectively on auto, homeowners, health and life insurance costs.

9. Oregon
The people of Oregon pay 10.6 percent of their annual income, or around $4,560, on auto and homeowners insurance costs.

8. Georgia
Georgians dish out 10.5 percent of their annual income, or around $4,327, collectively on insurance premiums.

7. California
Perhaps surprisingly, due to the state's high cost of living, California residents only fork over $5,034 or 10.5 percent of their yearly take-home pay on their bundled insurance rates.

6. Washington (state)
The total cost of auto and homeowners insurance only costs Evergreen Staters 10.4 percent of their yearly income, at a cost of $5,199.

5. Ohio
Ohioans pay, on average, around $4,421 per year on insurance, or roughly 10.3 percent of their annual take-home pay.

4. Virginia
Virginians only pay $4,808 or 9.8 percent of their annual earnings for insurance.

3. Washington, D.C. Residents of the nation's capitol dole out 9.4 percent or around $6,027 of their yearly income to pay for their collective insurance costs.

2. Utah
People living in Utah pay a mere 9.1 percent of their annual income for insurance at roughly $3,942 per year.

1. Maryland
Coming in at the No. 1 spot, Marylanders pay the least money as a percentage of their income, as insurance rates only account for 7.7 percent, or $4,185.

CoverHound provides quotes on auto insurance and homeowners insurance from its convenient website.