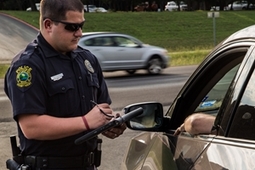 Speeding isn't something drivers usually go out of their way to do, but sometimes a lead foot can get the best of us. Sometimes we don't even realize we're speeding until we see flashing lights in our rearview mirror. Ford aims to fix this. According to the company, it has announced the launch of the Intelligent Speed Limiter, which prevents drivers from speeding.

The car employs a camera on the windshield that tracks and monitors road signs that indicate the speed limit. If the car is exceeding the limit, the system automatically controls engine torque by electronically adjusting the amount of fuel delivered to the engine, thereby bringing the vehicle in line with the legal limit.

Drivers can still maintain ultimate control of the car's speed and can override the system by firmly pressing the pedal to the metal. This technology brings the autonomous automobile one step closer to everyday usage, if only in baby steps. Ford believes this will not only reduce speeding tickets, but it will lessen drivers' stress levels too.

"Intelligent Speed Limiter is one of those technologies that people will wonder how they did without - not just because they avoid speeding fines but because driving becomes that much less stressful," said Roeland de Waard, vice president, sales and service, Ford of Europe.

Driving records impact insurance rates
Your driving history has a significant impact on your premiums. The more speeding tickets that pile up on your record means the more you end up paying for insurance. Insurance companies use driving histories as one of the most significant factors in determining your rates, more so than age, sex, marital status, address and the make and model of your car, according to Forbes.

Insurance companies compile actuarial data that suggest the more moving violations you receive, the greater the risk you become for being involved in a traffic accident. Because of this, a single traffic ticket bumps up the average premium rate almost 22 percent.

A car that controls and corrects for speeding can end up saving you countless dollars in traffic tickets and insurance costs.