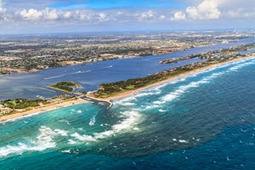 With hurricane season officially here, communities all along the Atlantic Ocean and the Gulf Coast are completing their annual preparations for the greatest risk that comes with their respective territories.

The past two years have been relatively quiet, with the one notable exception being Superstorm Sandy, which ravaged large portions of New Jersey and New York in late 2012. That doesn't mean residents of coastal communities all along the Eastern Seaboard and throughout states like Alabama, Louisiana, Mississippi and Texas aren't preparing for the worst case-scenarios that can present themselves this - and every - June through October.

One state with an extensive hurricane history that's more prepared than ever is Florida. The Sunshine State has been famously lucky of late, having dodged true hurricanes over the past eight years. And according to a recent Reuters report, the insurance industry and its local customers have made ample use of that much-appreciated time. Robert Hartwig, president of the Insurance Institute, has said that the state is "in its best position in a decade," with homeowners and flood policies updated and revised to account for new risks and costs - many of which have been adjusted in the years since Florida's last major storm touched down.

With new risks come new preparations
National weather forecasters are anticipating that the Florida peninsula will be spared again this year, thanks to an El Niño-esque pattern that should limit the number of storms reaching the southeastern United States. Still, residents of this hurricane-educated region are wary of the fact that just one bad storm can mar an otherwise silent season, while also recognizing the inherent risk presented by a series of recent reconstruction efforts. In particular, a group of high-rise condominiums in the Miami metro region have caused concerns, underscoring the question of what constitutes appropriate recovery.

"Simply rebuilding isn't enough," Jimi Grande, vice president of the National Association of Mutual Insurance Companies, told Reuters. "We need to start approaching disasters with a focus on preventing losses rather than simply trying to recover from them."

True as that may be, there's only so much a single homeowner or family can do in the name of preparation, and Hartwig noted that residents are not bearing as much risk as they once did. In light of storms such as Sandy and Hurricane Katrina, capital investors now account for more of the burden, funneling resources through insurance programs like the Florida Hurricane Catastrophe Fund. More generally speaking, increased competition and market saturation have made coverage more affordable for consumers, meaning many residents required to purchase flood insurance can do so with the knowledge that they will be better equipped to handle damages than they would have been in 2005. That was the year Hurricane Wilma represented the last of five major hurricanes to strike the state over the course of two-year window.

The collective goal is that, even given the state's recent luck, Florida will be prepared because of what it's stashed away for the next very rainy day.