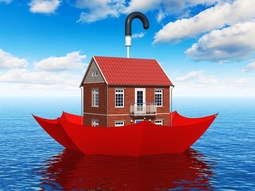 The most important thing to remember about flood insurance is that it's not part of your homeowner's or renter's insurance policy. That is, if you have only homeowners or renters insurance your belongings are not protected against floods.

You therefore have to get your flood insurance separately, which is still not as simple as it sounds. That is because only about one in five homes in America are at risk for a flood, and those dwellings are clustered in flat areas next to large bodies of water (see: New Orleans).

Since the large majority of homes are not in danger of flooding -- and since flood damage can be so catastrophic for those who endure it, the market for flood insurance suffers from adverse selection. This means that the number of people who present claims to their carriers is greater than the number interested in buying policies. Even more succinctly put: There is more money going out than coming in.

As a result, the federal government had to step in, as insurers were understandably reluctant to dive into such a market where losses were pretty much guaranteed. In 1968, the National Flood Insurance Program (NFIP) was created, giving people the ability to buy flood insurance from the government, if their community was eligible. In some districts flood insurance is mandatory because the government requires that mortgaged properties in Special Flood Hazard Areas (SFHA) be insured against such water damage.

It is also vital to note that flood insurance often does not go into effect until 30 days after you sign up for the policy. In other words, don’t wait for the big storm in the 10-day forecast to purchase the insurance; you’re not likely to get it in time.

Such policies can be purchased from carriers participating in the NFIP. CoverHound does indeed participate and is offering flood insurance.