Coverhound’s Steepest And Cheapest States For Auto Insurance In 2015 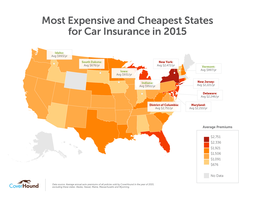 At CoverHound, we get a lot of questions and queries regarding the insurance realm. Anything you can think of under the auto, renters or homeowners insurance sun – odds are we’ve dealt with it. But it wouldn’t do us any good to keep that information locked away, would it? So, we decided to put together a handy graphic illustrating the cheapest and steepest auto insurance costs by state in 2015. This data is based on what our customers have paid for premiums using the CoverHound website, and excludes Alaska, Massachusetts, Maine, Hawaii and Wyoming due to inconclusive or sparse data available.

Let’s take a look at the steepest and cheapest auto insurance costs by state in 2015. 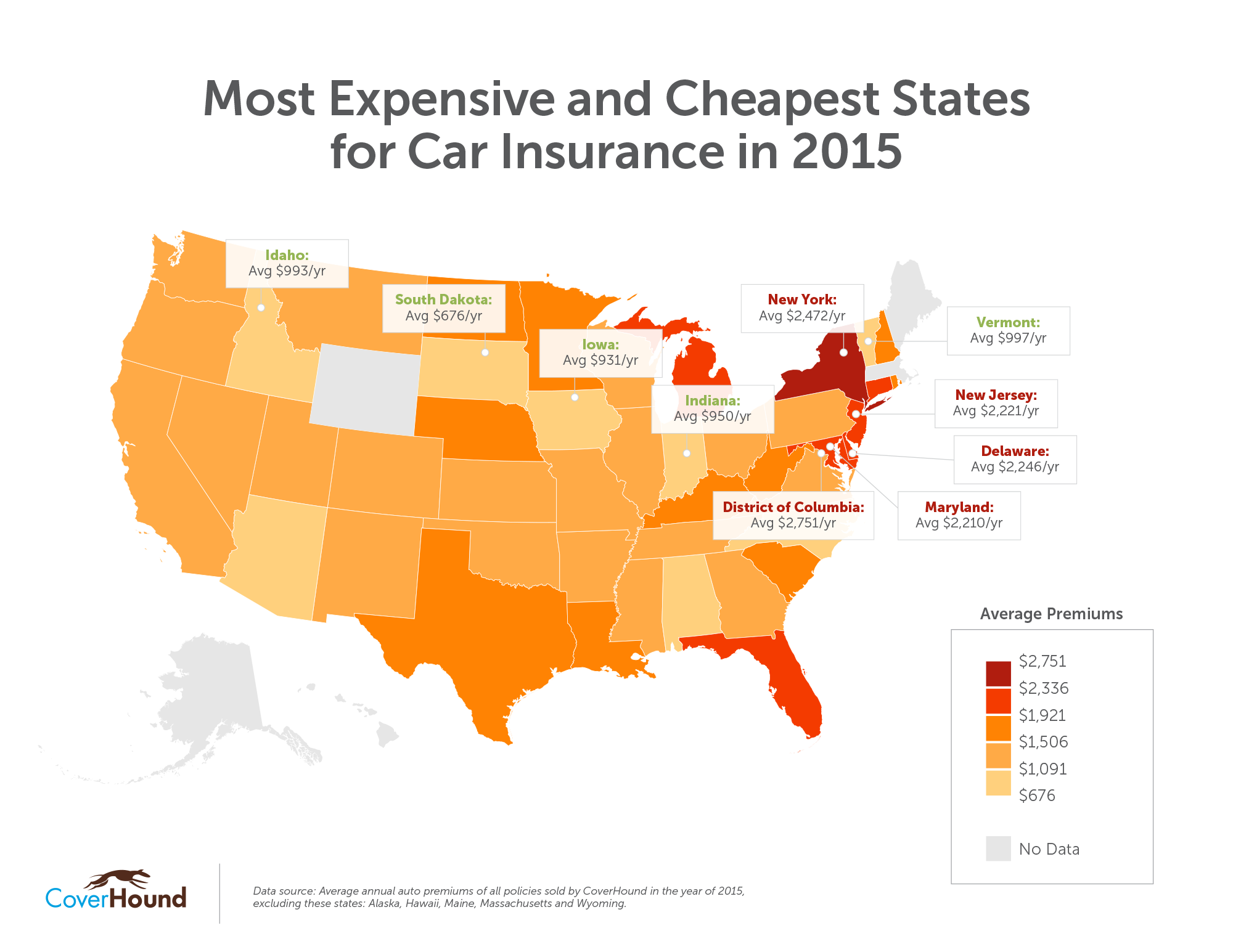 The most expensive state…check, sovereign district on the list is none other than our nation’s capital. D.C. suffers from an area that’s completely urban, thus bringing treacherous commutes, more traffic collisions and higher vehicle theft rates.

New Jersey is the most densely populated state in the United States, and to top it off, 70 percent of its drivers elect for more coverage than is required. So this number’s a bit misleading if you are only looking for basic or minimum coverages. However, being sandwiched between most of the other states on this list definitely doesn’t help The Garden State’s cause. In fact, nearly the entire state of New Jersey is classified as an urban area, which makes all the difference when it comes to insurance premiums. New Jersey’s also a no-fault state, which only hurts things further.

Delaware may get passed over a lot in thinking about expensive places to operate a car, but due to its size, is the 6th densest state in the nation. Couple that with it being wedged between auto insurance horrors Maryland and New Jersey, and you have a recipe for lofty premiums.

Maryland’s average yearly premium rate is crippled by its two congested urban areas (D.C. and Baltimore). In fact, the D.C./Maryland/Virginia tri-state area ranks as the worst commuting area in the country, with commuters spending an additional 82 hours a year in their vehicle due to traffic delays. However, much of the state outside of those urban pockets is less dense, bringing lower premium rates with it.

South Dakota’s the 17th biggest state, but 5th least populated (in both density and size). That trickles down to collisions, theft and traffic. Residents also make a generally lower income compared to other states. So while the state’s drunk driving rate is higher than the national average, there are more than enough factors which give South Dakotans a considerable auto insurance discount compared to the rest of the country.

The 7th least dense state in the nation comes in second on our cheapest states list. Aside from some rather mountainous driving terrain, Idahoans don’t have too much to fear on the roadway as theft, vandalism and collision rates are all lower compared to the national average.

Smack dab in America’s Heartland, the Hawkeye sits in the middle for population size and density in America, but it however does not require its drivers to purchase auto insurance. Instead, once you get in an accident you’re required to show proof of financial responsibility. Iowa, though carrying a decent population, does not have any cramped urban areas and is remarkably safe, both of which contribute significantly to its friendly auto insurance rates.

Though certain areas (NW Indiana and Indianapolis metro in particular) aren’t as premium-friendly due to high vandalism and theft rates, the majority of Indiana is quite rural. And if there’s anything you’ve learned up until now, the more rural a place is, the lower crime rates and traffic it has. These qualities are auto insurance gold.

Vermont unlike its NE region counterparts, is extremely light on the auto insurance budget. Though Vermont is comprised of a tiny area (2nd smallest in the nation), it has no major urban areas that contribute to traffic, theft or vandalism, which is the reason it’s consistently among the safest states in the country.

When you shop insurance with CoverHound, you can be sure you’ll get the most competitive auto insurance costs by state, no matter where you live. Speak to one of our licensed insurance representatives today or give our online comparison and shopping portal a try.