When a BUI becomes a DUI 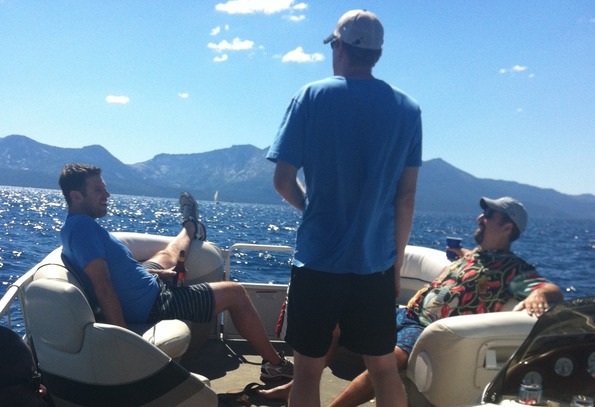 A few weeks back I was on Lake Tahoe for a good friend’s bachelor party. You can see me in the picture above, on the left, looking quite relaxed. You may even notice my left foot is propped up, signifying relaxation. Yes, life was good.

I was even moved by the spirit of the moment to drink a can (or bottle) of courage or two, despite my aggressive intolerance toward gluten.

Then came a question I was waiting for all day.

“Josh, do you want to steer the ship?”

But right before I took the helm, a wise man across from me said something I should have already known.

That insight spawned a quick, revelatory conversation about how a BUI -- Boating Under the Influence citation -- is viewed as the same level of criminality as a DUI is in many states.

There are two really bad things about DUIs long term -- above and beyond the shame some folks feel.

One is that you get arrested. Pulled from the tranquility of the sea, in this case, only to get handcuffed and tossed quickly in jail.

Second, and more germane for our purposes, is that DUIs have extremely negative effects on your car insurance payments. We have great data on this exact issue, and the Cliff Notes version is that a DUI, on average, makes your car insurance go up 94.13%.

That’s right, those couple of beers before taking the helm of a simple pontoon boat can pretty much double your car insurance rates for a year, and still seriously inflate them for up to five years.

Also it's not just pontoons; the laws extend to include kayaks, canoes, sailboats -- anything that needs to be steered while in the water.

Different states and different carriers have varying perspectives on whether a BUI and a DUI are of the same grade of transgression so the best bet is to check with your agent as to your classifications right before you buy a new policy.

This is not another lecture about the dangers of drinking and driving, or even drinking and boating. Just know the next time you get behind the wheel of a sea craft after drinking a few beers that you are not only putting yourself and your passengers in greater danger -- but you could also could be at risk of paying thousands of dollars in extra car insurance in the years ahead.