Romney or Gingrich -- Who Pays Less for Car Insurance?

By Josh Anish on December 14th, 2011 in CoverHound 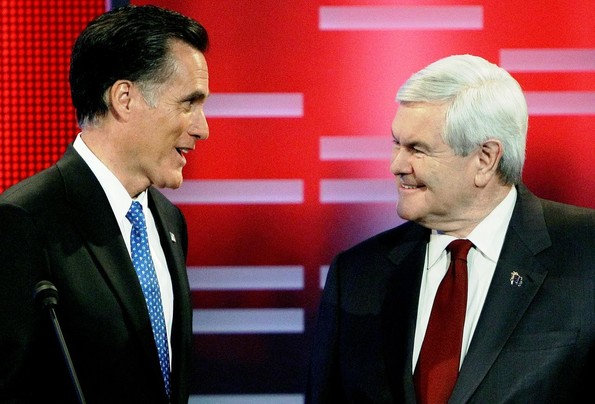 Whether you hug trees for a living or salute the military every morning with your apple pie, you’re certainly aware that the Republican primary has come down to Newt and Mitt. And while they both have their merits and detractors, everyone seems to agree it’s fun watching them go at it.

Since they agree on so little, it’s probably best to let them stick to debating the important stuff like the economy -- and let us figure out which of them pays less for car insurance.

Age. Gingrich is 68. And even though the jet-black hair on the top of his head might convince you otherwise, Romney is 64 -- much more aligned with silver hairs around his ears. They’re basically the same age but the small difference is a big one. Many carriers determine older drivers to be more risky, and most use the age of 65 as the threshold for what is considered older. Advantage: Romney.

Education. Romney has a BA, an MBA and a JD (BYU, Harvard, Harvard for those keeping score). As he’ll often remind you, Newt Gingrich is in possession of a PhD from Tulane University, where he also earned a masters -- on top of his BA from Emory. Because insurers privilege those with more education, both should do well relative to the rest of the population. The major threshold in terms of saving is almost always a bachelors degree; a masters might yield a tiny discount as well. And while diminishing returns in the education department aren’t unusual (especially at laid-back dinner parties), we can also assume that a doctorate means a few pennies fewer on car insurance as well. Advantage: Gingrich.

Gender. Michelle Bachmann would have an advantage here because women generally pay less for car insurance than do men, but her campaign seems on the brink of not being able to afford anything. Advantage: push.

Driving History. Nothing much can be found on the Internets about driving scrapes for Newt Gingrich, and, given his frankness on so many others matters, we’re going to take his -- and Google search’s -- word that his driving record is pretty clean. For his part, Romney was involved in a rather notorious accident that proved lethal to a passenger while driving in France in his twenties. And though he was ruled not at-fault and though international accidents usually don’t count against your record, it could raise eyebrows. Advantage: Gingrich.

Occupation. The impulse is to declare this one a push, since they clearly have the same job -- that of politician. But since neither of them is terribly comfortable with the label we’ll judge them as they see themselves. Mitt Romney is a businessman, having been one of the fundamental people in Bain & Company’s history. Gingrich, on the other hand, is an ol’ professor, having taught at West Georgia College and the National Defense University. And while Wall Street isn’t nearly as perilous a career path as, say, a race car driving, it can lead to higher premiums because of the long hours and late commutes. Teachers generally pay less for those same reasons, inverted. Advantage: Gingrich.

Cars. According to Motor Trend, Romney’s car of choice is a 2005 Ford Mustang Convertible. Considering his large personal fortune, he likely has a series of other cars in his quiver -- but we’ll judge him only on his favorite. Not much information is available on Gingrich’s wheels, but as the Republican field’s resident “futurist” we can assume he walks the walk (or drives the drive) and gets around in a hybrid or electric car, especially since he supports tax breaks for buying them. That’s certainly admirable but we can’t forget that electric cars can actually mean higher insurance premiums. Advantage: Romney.

So it’s pretty darn tight. Three wins for each and a push, by my count. The battle for the best car insurance rate between Gingrich and Romney looks as close as the actual race does. Lucky for us, the voters get to decide that one.